Theatre New Brunswick Theatre School is pleased to present ANNIE, based on the book by Thomas Meehan, with music and lyrics by Charles Strouse and Martin Charnin. Set in the 1930s, this heart-warming musical takes you on a fiery young orphan’s journey to find her long-lost parents. Annie, who lives in an orphanage run by the tyrannical Miss Hannigan, soon finds her luck changing when she is befriended by billionaire businessman Oliver Warbucks. 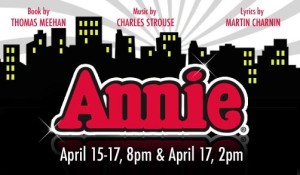 Running April 15-17 at 8PM and April 17 at 2PM at The Fredericton Playhouse, ANNIE stars TNB Theatre School’s Senior Musical Theatre students.  Leading this group of talented young artists are Co-Directors Melanie Cain and Tania Breen. “The students have worked very hard throughout the rehearsal process and, together as a team, have produced a wonderful show” says Cain, who is also the show’s choreographer. “I couldn’t be prouder of their accomplishment, and feel lucky to work with such dedicated performers.”

Tania Breen shares the same sentiment, and says that there’s been an impressive progression with this group of students. “It’s been an incredibly smooth transition from the rehearsal hall to the stage, and the kids are prepared to put on a fantastic show.” Adds Breen, “We couldn’t ask for a better cast!”

Artistic Producer Caleb Marshall agrees that the students have created a stellar show, and gives praise to the team of directors and designers that have taken “a Great Depression era story of hope and optimism and filled it with humour, heart, and a little spunk.” Continues Marshall, “The music is great to begin with but, combined with the singing talent of these students and a live orchestra, this production would hold its own with any other on a similar scale in the continent. It’s the best you’ll find for the age and experience of the students. They’re fantastic!”

Joining Co-Directors Melanie Cain and Tania Breen on the creative team is Orchestra Director and Sound Design Instructor, Michael Doherty; Set and Lighting Designer Mike Johnston; Choral Director Alex Good; and Costume Designer Sherry Kinnear. This story is sure to charm the coldest of hearts, and we bet your bottom dollar you’ll love it!

Special thanks to the McCain Student Ticket Program and the City of Fredericton.

get social with us